Some time ago a friend quoted the old saying about when life gives you lemons, make lemonade. I replied that I make sorbet. She said that wouldn't do for her as she's allergic to eggs. I mentioned that I don't use egg in my sorbet and she asked for the recipe. Having typed it up I thought I might as well reproduce it here. 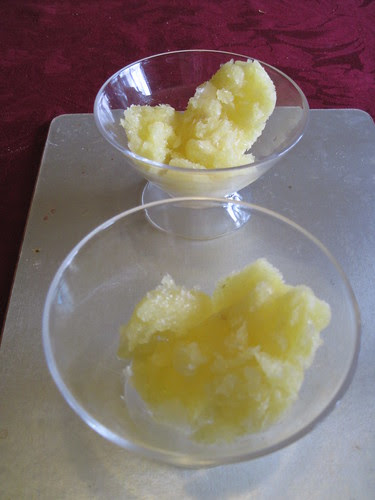 This recipe is based on the one in Larousse Gastronomique, but adjusted as a result of much experimentation. The secret of making a sorbet without using egg whites is to add enough sugar to lower the freezing point significantly. Larousse specifies a target density of 1.1697 (spurious precision there) but uses such a large quantity of water that a lot of sugar has to be added later on.

1/ Weigh the fruit, in grammes.

2/ Make a syrup.
For every 100g of fruit, use 30g of sugar and 20ml of water. Put sugar and water in a small pan and bring to the boil, stirring continuously. The sugar probably won't dissolve until it's nearly boiling. Boil gently to make a clear syrup. Stand the pan in a bowl of cold water to cool.

3/ Finely grate the zest then squeeze the juice from the fruit. You should have about 40ml of juice for every 100g of fruit. If you've got a very different amount it might be worth making more or less syrup.

5/ Weigh an empty measuring jug. Pour the mixture into the jug and weigh again. Divide the difference in weight by the volume of mixture to get its density. This should be in the region of 1.17, a bit over is better than a bit under. If the density is too high, stir in a little water and measure again. If it's too low, stir in a little sugar and measure again. You can guess how much sugar or water to add - 10ml of water adds 10ml to the volume and 10g to the weight, 10g of sugar adds 10g to the weight and very little to the volume.

6/ Pour the mixture into a suitable container and place in the deep freeze. Stir it every half hour or so, particularly as it begins to get slushy. You could fold in some beaten egg white at this point, but you don't need to.

7/ Remove from the freezer half an hour or so before serving.