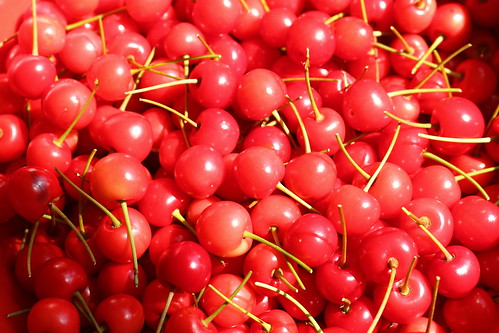 I have a Morello sour cherry tree in my front garden that, most years, produces more fruit than I know what to do with. This year I asked online for ideas to use the surplus and someone suggested sour cherry soup, a Hungarian speciality.

I searched for recipes on line and found a huge variety — whole cherries or pulverised, warm or chilled, with or without alcohol. Many of the recipes include lemon juice and/or zest, but these tend to be using sweet cherries rather then the (not often available to buy) sour cherries I have.

I combined the best elements of several recipes to come up with this:


The result was amazingly good. A smooth, slightly sour, soup that really got the taste buds going for the main course. I'll definitely be making it again.

Next time I'll try simmering the stones in water first, to extract some of their almond flavour. I'll also work some of the sieved cherries into the cream and flour to loosen it before adding back to the rest of the cherries.

June 2022: Since writing the above my recipe has evolved a little. Please see the updated version.

A note about cherry stoners

For several years I used a traditional cherry / olive pitter that does one cherry at a time. This worked well, until its spring broke, but tended to spatter the kitchen with cherry juice. I now have a multi pitter from Lakeland. I can no longer find it on their web site, but it appears to be functionally identical to this "Lurch" branded one from Amazon. This does seven cherries at a time, and catches the juice, but is designed for large cherries. The thick prongs rip my small cherries apart, and the smallest cherries can get pushed through the supporting holes. Maybe I should try this "Vantiya" model instead.