The steam valve on Wilesco toy traction engines (and steam rollers) is rather basic. It has a plastic lever, which is loose when cold, and goes from closed to fully open in less than a quarter turn, making it rather difficult to set the engine speed precisely.

I decided to replace it with a better quality "globe" valve to give finer control, and to move the valve to the driver's end of the engine. I also wanted to add a displacement lubricator to ensure the cylinder is always well oiled.

As Wilesco is a German company their models use metric threads throughout, whereas British steam models still use imperial sizes. I prefer to work in metric so bought all the metric fittings I needed from a German supplier Modellbau-Niggel. I was at least able to buy metric pipe from a British supplier, Macc Models.

Connecting the steam valve to the boiler

I made a simple pipe bending jig out of washers, nuts and a bolt. Cutting away the side of one of the washers allows bends to be made in close proximity, as well as making it easier to remove the bent pipe from the jig. 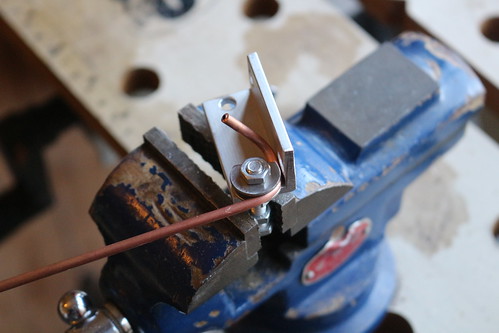 After bending the pipe and cutting it to length I soldered pipe nipples (or cones) to each end. As you can see, I used a bit too much solder on one of them. 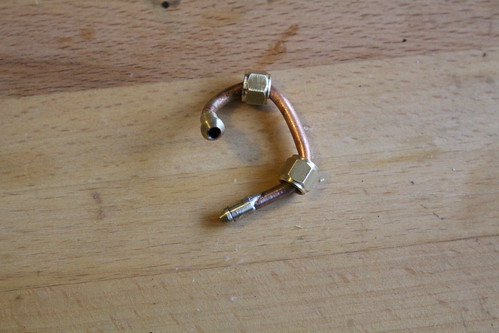 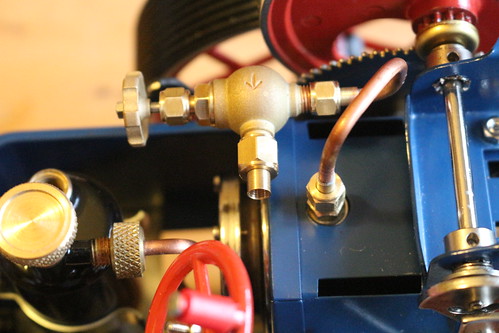 If you've browsed the Modellbau-Niggel web site you may have noticed that they don't sell a globe valve (or oiler) with 3mm pipe connections. I used their part number 310 425 which has an M6x0.75 threaded inlet and a 4mm pipe nipple outlet. I shortened the threaded inlet and then used a centre drill to make a seat for a 3mm pipe cone. I used a sleeve of 4mm brass tube to solder the outlet nipple to 3mm pipe.

Connecting the lubricator to the steam chest

The traction engine's "steam chest" uses a flared pipe connection with an M6x0.75 nut (or screw, as it has male threads) to clamp the flared pipe to a sealing washer. The pipe is about 3.7mm diameter, so I couldn't simply reuse the nut with my 3mm pipe. 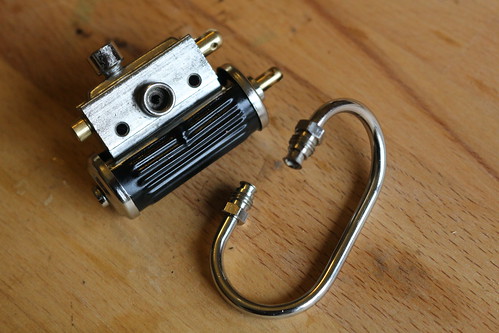 Instead I used part number 706 675 which is a good fit on 3mm pipe. I cut off one side and shortened the other, then filed off the thread at the very end so it fits the steam chest. Then I flared the end of some 3mm pipe. 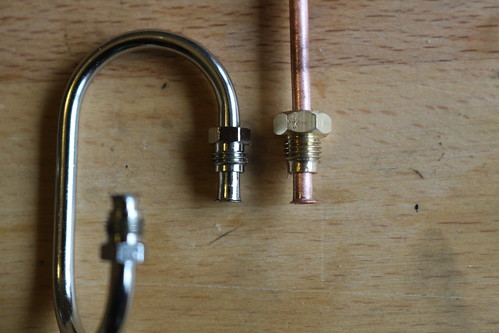 After bending the pipe and soldering a 3mm nipple to the other end the oiler was fitted to the traction engine. 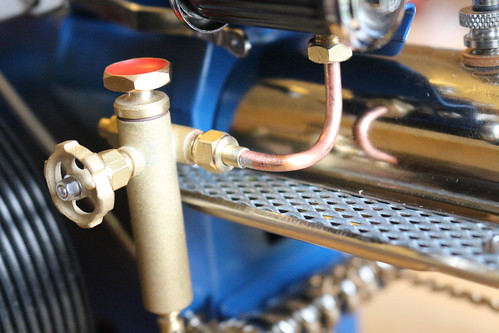 As with the steam valve, the oiler I used (part number 400 104) has M6x0.75 threaded connections on which I used a centre drill to make seats for 3mm pipe nipples.

The last bit of pipework is much simpler, apart from sleeving one end to fit the 4mm outlet of the steam valve. 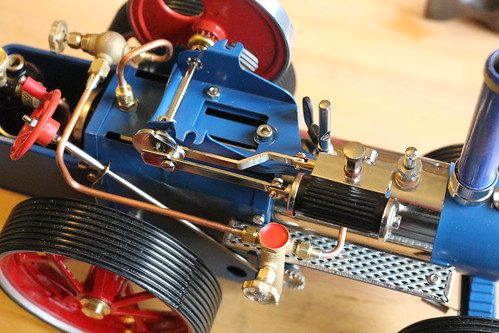 Initial tests show everything is working as it should, and the new steam valve is a considerable improvement. I've yet to determine the optimum setting for the oiler's needle valve, so am erring on the generous side for now, giving it one whole turn from fully closed.
Posted by Jim at 12:26 No comments: 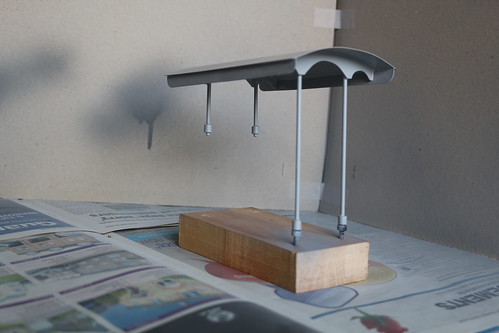 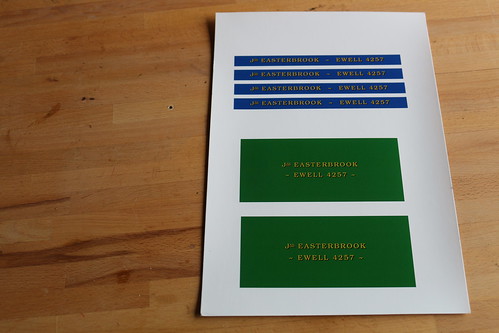 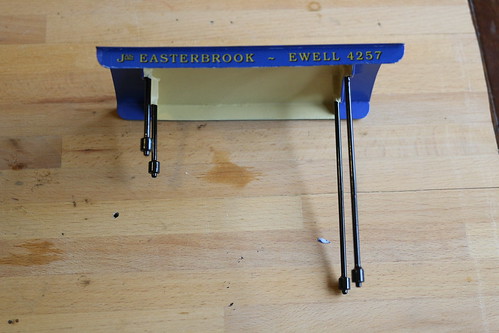 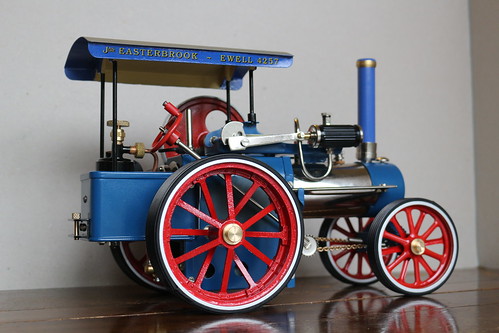 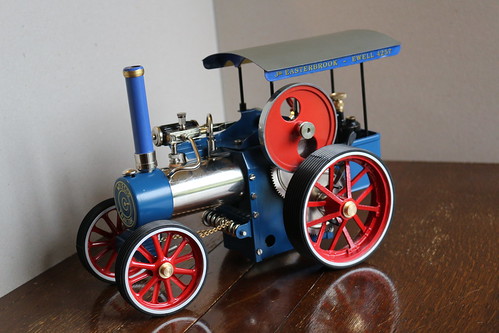 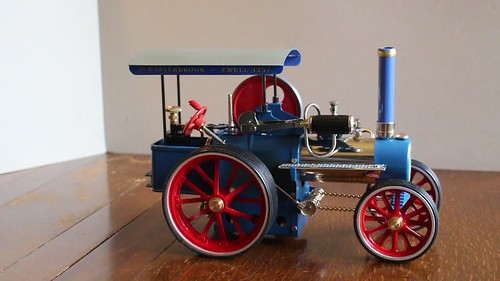 The biggest fan of Wilesco toy steam engines would have to admit that their traction engine's wheels are not particularly attractive or realistic. (Yes I know it's a toy, not a scale model.) 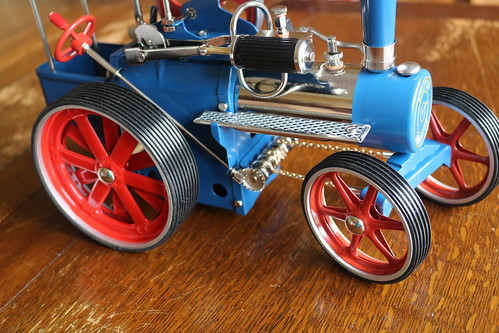 A popular way to improve the appearance of the rear wheels is to replace the pressed steel spokes with complete Mamod traction engine wheels. Mamod wheels are castings that look a lot better but can't be used directly as they're too small. Fitting them inside the Wilesco rims gets round this problem. 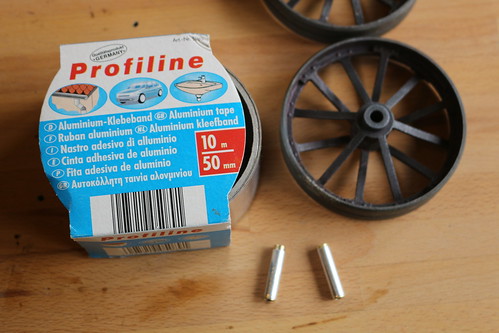 I bought a pair of old Mamod wheels on eBay. Their paint was in poor condition so I stripped them back to bare metal. The Mamod wheel's centre hole is ¼" diameter (6.35mm) compared to 5mm on the Wilesco. I cut two lengths of 6mm OD (5.1mm ID) brass tube and wound them in three layers of thin aluminium tape to make snugly fitting adaptor bushes. 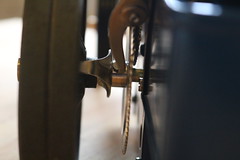 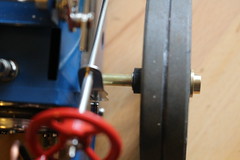 I bought a custom length axle with brass hubcaps from CJW Steam Ltd and made shorter replacements for the Wilesco brass spacers using some more of the 6mm brass tube. I then assembled everything to make sure it all fitted and that the clutch would still engage and disengage correctly. 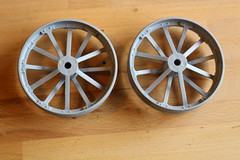 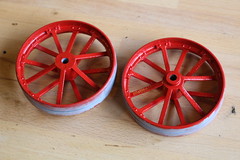 The next job was to prime and paint the Mamod wheels. I used an etching primer spray followed by two brush coats of Humbrol red gloss enamel. 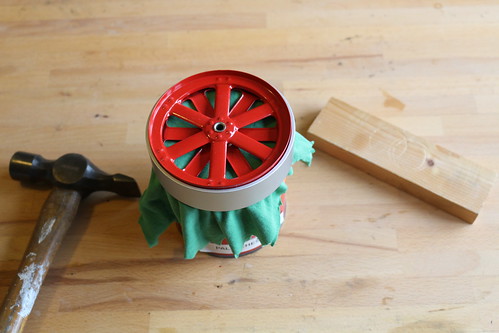 While the paint was drying I removed the Wilesco rims from their pressed steel spokes. I found a suitable size tin of paint to support the inner part of the wheel (with a bit of old T-shirt for padding) while I gently eased the rim off with a hammer and bit of wood. 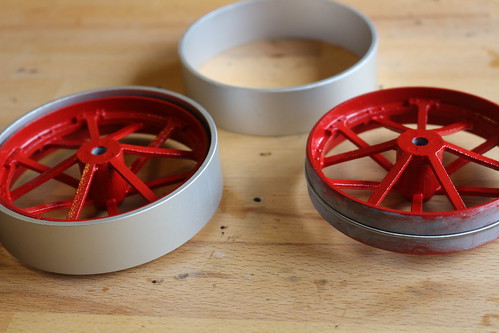 The Mamod wheels are several millimetres smaller than the Wilesco rim's inner diameter so I put a spiral drive belt (as used to drive toy steam engine accessories) around each wheel to make them a better fit. I then glued the wheels inside the rims with epoxy resin adhesive. 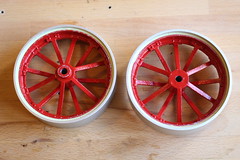 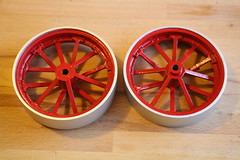 Finally I filled the gap between Mamod wheel and Wilesco rim with some Milliput and, once it had set, painted it and touched up some other damage to my earlier paintwork. 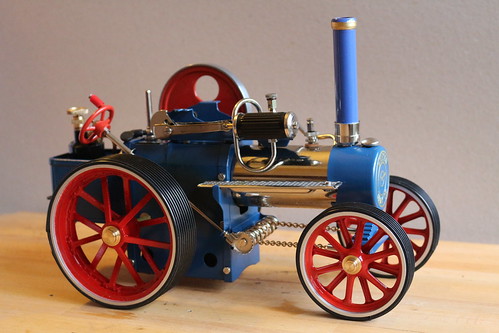 I'm very pleased with the final result. You'll notice I've also doubled the number of spokes on the front wheels. This is done by removing one of the pressed steel centres from the rim and then replacing it with a 30° offset. I also gave the front wheels a coat of the same red paint as their original colour is a slightly more orange shade of red.
Posted by Jim at 16:27 No comments: